In a blog for the GMA News website entitled “Binay voters deserve better than Binay,” Leloy Claudio of Akbayan continues the bashing of Senator-elect Nancy Binay. Started by his party mates during the recently concluded 2013 mid-term elections, this was part of a desperate bid to shore up the doomed senatorial bid of Akbayan bet Risa Hontiveros. Binay refused Hontiveros’ challenge for a public debate. In memes spread online, Binay’s alleged lack of credentials was opposed to Hontiveros’ supposed sterling record.

In this latest addition to the “we can’t get over Nancy’s winning over Risa club,” what Leloy calls the “Pinoy Left” is included in the mix as a target for some petty swipes. Claiming that the Philippine Left is prone to avoiding criticism of the masses, Claudio chastises our homegrown leftists for supposedly patronizing the masses even if their opinions and decisions are wrong (like choosing Binay over Hontiveros).

In the process, Claudio contrasts Filipino leftists with Marx who he said was ruthlessly demystifying the “false
consciousness” of the working classes. Claudio also explains this patronizing attitude as the outcome of a misplaced obsession with a doctrine called the “mass line” which he claims originated in Mao’s “practice of exiling anyone who disagreed with him.” 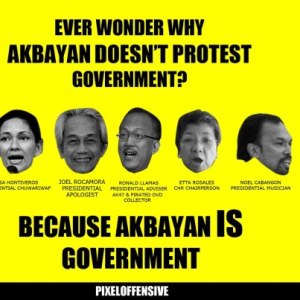 In short, in an effort to sound intelligent Claudio ends up spouting some of the most absurd claims, revealing that he does not really know what he is talking about… unlike Nancy Binay who by her winning big proved that she knew exactly what she was doing, the Philippine Left which remains one of the most vibrant in the world today, or the Filipino masses who have time and again proven to be the makers of history.

For isn’t the Filipino Left at the forefront of mass struggles against the anti-people policies of the Noynoy Aquino regime like the Conditional Cash Transfers and Private Public Partnerships that continue to tie the country as a source of cheap labor and resources by foreign monopoly capital and perpetually dependent on foreign direct investments and loans? Even as this is considered normal by the dominant neoliberal common sense that Claudio’s comrades are so quick to apologize for?

Isn’t the Left the first to expose the machinations of US imperialism to a population whose majority still dream the American dream and look up to Uncle Sam as a benevolent ally? Aren’t left-wing student activists the first to get truncheoned in front of the US Embassy for this? Aren’t they the ones who dare cross the bourgeois limits of hypocritical niceties to sharply criticize the progressive pretensions of the Liberal Party lapdog Akbayan?

Perhaps he has become too cozy in some NGO office, government agency largesse, or the cloistered spaces of the academe with social media as his only interaction with the real world? If so, it is only natural for people like him to be blind to the efforts of the movement in arousing, organizing, and mobilizing the largest number of people for social change. It’s no surprise that he conveniently dismisses how leftists have been offering an alternative to the rotten system – an agenda that is brushed off by those in power as “obsolete” or “utopian” fantasies.

What is the Mass Line?

Young volunteers were indeed mobilized to the countryside to serve China’s peasant majority in various ways during Mao’s rule, especially during the Great Proletarian Cultural Revolution. What is wrong with that? What is wrong with serving the people? And yes, this is in line with the mass line. But what exactly is this so-called mass line that Claudio is so dismissive of?

In the simplest terms, it is a basic principle of leadership that guides the political work of the most organized and politically conscious section of the masses. It simply tells us that the struggle to transform society cannot succeed without the mobilization of the masses. It tells us that in every endeavor it is necessary to trust and rely on the masses. Far from originating in the alleged practice of exiling political enemies by Mao, the mass line stems from the realization that “the people and the people alone are the motive force in the making of world history.”

A prime consideration in this process is the raising of the masses’ political consciousness on the basis of their prevailing level of consciousness. It means going to and learning from them, mingling with them and listening to their concerns, organizing them, and empowering them to give them the courage to struggle for change. The mass line was already implicit even in the writings of Marx and Lenin but was systematized by Mao. Marx did not write his critique of capitalism in order to denigrate the people for being captive of dominant ideologies but to help them fight oppression and exploitation.

Which leads us back to the supposed uneducated choice of the country’s poor as defined by Claudio. When leftists cautioned against the Binay-bashing by predominantly privileged middle class netizens in response to the election results, it was not for the purpose of patronizing the masses. It was to explain that a people suffering from hunger, unemployment, poverty, lack of education, and social inequality are extremely vulnerable to deception and the promise of quick gain because of unjust social structures and a political system that skews the electoral exercise in favor of the ruling elites.

Ultimately, to blame the masses for their miseducation is different from blaming the system that profits from their miseducation. To condescendingly dismiss the people for voting for Binay while remaining silent on the victories of other scions of political dynasties (with or without any concrete credentials) like Bam Aquino or Edgardo Angara is the height of hypocrisy. It also speaks much of the kind of elitism and trapo politics that Claudio and his party is immersed in.

Claudio makes it seem that it was the poor that supported Hitler and Mussolini in the 1930s and 40s. But in fact, it was the support of the middle classes – the labor aristocrats, yellow union bosses, small shop owners, public sector employees, professionals, and academics like Heidegger – that Fascism courted to solidify its dictatorial rule. This elision speaks much. For just like the German and Italian middle classes that formed the popular social base of their respective Fascist regimes, today Akbayan also performs the same service of providing a progressive veneer to the Aquino regime and its brutal Oplan Bayanihan counterinsurgency war of suppression.