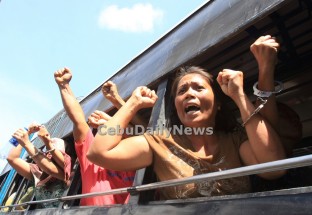 August 29 was National Heroes Day, an otherwise ordinary sunny Monday if not for the fact that it was a national holiday.

Taking advantage of the long weekend, the 3 were part of a group of 11 students from Cebu City who joined a basic mass integration program in Sitio Camarin, Barangay Bonbon, Aloguinsan to experience the situation of the poor peasants in the area firsthand.

Januelle intended to use his interaction with the peasants for a thesis study on community empowerment.

The peasants under the San Roque Farmers Association (SRFA) have set up camp along the entrance to the contested land to prevent the Gantuangcos from fencing the 168 hectare farmland that they have been tilling for over a hundred years.

There had been tensions between the peasants and the Guantangcos before, but the presence of police in full battle gear, with their rifles cocked, foretold that the day was different.

Earlier that morning, shortly before 6:00 AM, over three hundred uniformed men of the Philippine National Police (PNP) from the Midwest Cebu towns of Aloguinsan, Pinamungajan and Toledo City arrived in Sitio Camarin.

They carried shields and truncheons. They were also accompanied by a backhoe and a fire truck. They immediately went to work in behalf of the Guantangcos.

Tear gas and water from the fire truck were used to disperse the human barricade formed by the defiant farmers who were now fighting to defend their means of livelihood.

The policemen pounced with truncheons, dragged anyone from the protesters’ ranks, and chased anyone attempting to flee.

The incident becomes reminiscent of the Mendiola Massacre of protesting peasants heading for the Malacanang Presidential Palace in 1987 or the Hacienda Luisita Massacre of striking farmworkers in the estate owned by President Noynoy Aquino’s family, among many others.

By the end of the brutal dispersal at around 10:00 AM, 39 peasants and their supporters were arbitrarily arrested and brought to the Pinamongahan Police Precinct and Toledo City Jail, including the 3 UP Cebu students.

The detainees have since been released on bail. But not before languishing in jail for almost a week with the lack of offices during the long holidays delaying the processing of their bail.

The agricultural land, which is eyed for conversion into a shipyard and special economic zone offering super-profits for foreign monopolies and their local big business counterparts, was finally fenced by the Gantuangcos.

At least 86 families are likely to be displaced from their homes and lose their source livelihood from growing corn. The land has been tilled by the peasants and their ancestors since 1910.

The peasants were given Certificates of Land Transfers in the 1970s as beneficiaries of the government’s land reform program PD 27. The Gantuangcos threatened them with eviction in the early 1990s.

In response, the farmers formed their association and lobbied with the Department of Agrarian Reform, and later on the Department of Environment and Natural Resources (DENR), to assert their right to till the land.

They were finally granted certified cadastral claim certificates by the latter and the SRFA members have since tilled the land in peace.

But this changed early this year when renewed threats of eviction resurfaced with the attempts by armed goons of the Guantangcos to fence their farms last March 30.

More goons, this time a hundred strong and accompanied by forces of the 78th Infantry Battalion, returned in full force on June 29.

But each new attempt was successfully stopped by the SRFA members and their families who formed human barricades to prevent fencing.

A Court Order from the RTC 59 of Toledo City was issued on August 10 ordering the farmers to keep away from their land to give way for its fencing.

Invoking the court order, a hundred armed goons and elements of the Aloguinsan police attempted to fence the land once again on August 11.

The Guantangcos would finally succeed on August 29 with the brutal dispersal of the peasants by the combined force of the police and the army. 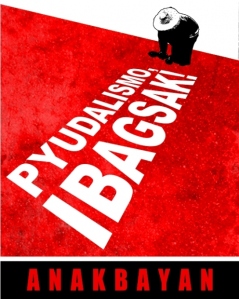 What is again made clear in this entire incident is the way the whole state apparatus, rather than upholding the people’s rights and welfare, is arrayed against the oppressed and exploited workers and peasants.

Despotic big landlords like the Guantangcos use their connections with public offices, take privileges from government agencies, and connive with the courts, and the police and the military to accumulate land at the expense of the lives of the peasant masses.

Instead of improving the lives of millions of the rural poor as a basis for national industrialization, every regime including the present Noynoy Aquino government enthusiastically plays the US-imposed script of keeping the country focused on the export of cheap labor and raw materials and dependent on foreign imports.

To keep the country dependent on foreign investment, aid, and debt, land reform is put on the backseat and huge swathes of the countryside remain dominated by the most reactionary big landlords and warlords.

The dispossession of millions of peasants and the creation of huge armies of the unemployed jerking back and forth into the cities and back to the countryside goes hand in hand with their subjection to coercive and backward forms of labor such as serfdom, tenancy, and sharecropping.

The establishment of special economic zones where multinational corporations enjoy tax exemptions and from where they earn massive profits which they remit to their mother countries, such as the one planned in Aloguinsan, only aggravates the maldeveloped state of the Philippine economy.

But as more peasants are deprived of their land, millions and millions will be pushed towards more militant forms of struggle for the protection of their rights and interests. More and more youths are also bound to follow the examples of Melanie, Januelle, and Remy Jade and join the people in their struggle. ■