President Noynoy Aquino began his term with promises of meaningful reforms and assurances that the Filipino people are his bosses. But a mere one year under Aquino has left serious doubts on the seriousness of this populist posturing. The policies and actions highlighted in Aquino’s second State of the Nation Address (SONA) as well as the more pressing and thorny issues that he evaded in the speech only reinforce this view.

Aquino once again rehashed his anti-corruption drive in his second SONA. This is underlined by his use of “wang-wang” as the speech’s central metaphor and unifying theme. “Wang-wang” or the loud sirens by official vehicles has come to symbolize government abuse and its banning, after all, is one of Aquino’s few visible accomplishments.

The President bragged about cutting the importation of rice, improving the country’s credit ratings, reducing hunger and unemployment, etc. But his silence on issues like genuine land reform, extrajudicial killings, human rights violations, wage increases, price controls, social services budget, among others, proves to be louder.

Coupled with this silence meanwhile is the use of deceptive statistics in the areas that Aquino did choose to highlight as his achievements.  Aquino’s claim of a decrease in unemployment, noted the independent research think-tank IBON Foundation, for instance, has been overtaken by the growth of the labor force by 1.2 million people and the increase in underemployment.

The decrease in rice imports, on the other hand, is attributable not to Aquino’s agrarian program but “to the expansion in harvest area and improvement in yield compared to last year’s conditions when palay production was adversely affected by the El Niño phenomenon,” as stated in a report by the Bureau of Agricultural Statistics. Rice trading remains monopolized by big businesses and their backers in the corrupt government bureaucracy while his family’s Hacienda Luisita and other big estates remain in the hands of despotic landlords.

Economist Winnie Monsod moreover criticized Aquino’s selective reference to a survey on self-rated hunger, the very same survey which Aquino strongly questioned earlier this year when it showed an increase in hunger incidence: “All of a sudden, he is quoting the survey without reservations… If he accepted that hunger went down in the second quarter, then he must accept that hunger went up in the first quarter.”

It becomes clear then that the second SONA only serves to gloss over his lackluster performance. In spite of bombastic promises of change, the Filipino people remain gravely affected by the political and socio-economic crisis engulfing the country. Aquino’s anti-corruption mantra also lacks substance without concrete measures to prosecute former President Gloria Macapagal-Arroyo and institute a Freedom of Information law. 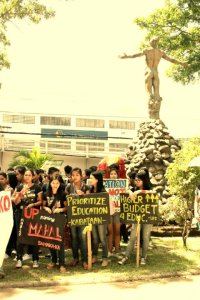 One indicator of change or the lack thereof is the people’s access to education.

In the past decade, the people’s ability to send their children and the youth to study has deteriorated with the commercialized state of education which has now spiraled to an average P501 tuition per unit from an average P257 per unit in the year 2001.

Hundreds of thousands of youths are thus deprived access to education with 73% of the Filipino youth currently out of school and only 14 eventually graduating college for every 100 students who enter Grade 1.

The lack of substantial change under the Aquino administration is underscored by its abandonment of the state’s responsibility to provide quality and accessible education at all levels. The proposed 2012 basic education spending of P238 billion remains a far cry from the United Nations mandate of spending 6% of the Gross Domestic Product or roughly P400 billion for education.

The State Universities and Colleges continue to receive budget cuts to push these institutions to become self-reliant by generating their own income from their students while no decisive steps are being undertaken to regulate spiraling tuition and other fee prices in private schools.

In short, education is not seen as a lasting investment to mold brilliant young Filipinos for nation-building. Just like under the previous Arroyo administration, education is still seen as a means to produce cheap laborers for the economic requirements of foreign powers like the United States.

Fulfilling debt obligations and implementing unjust conditionalities by foreign lending institutions continue to be the highest order of the day. This is reflected in the bragging over increased credit ratings as a gauge of economic development. After all, the Aquino administration achieved this rise in credit ratings, or the government’s ability to pay for its debts, by under-spending on social services to make way for more foreign debt spending: in short, at the expense of the people.

His “matuwid na daan” clearly does not institute difficult reform measures that address landlessness, joblessness, lack of education, foreign domination, and bureaucratic corruption that keep the country’s land, wealth, and power concentrated in less than a hundred elite families while 70% of the people live on little more than P104 a day.

The second SONA fully exposes who the Aquino administration real bosses are. The country’s economic situation is good even if the masses are suffering from grave economic hardships because they do not matter. What matters most for this government is the ability to create a favorable climate for foreign monopolists and their local hacendero, big comprador and bureaucrat partners to further exploit the country’s natural and human resources.

This once more proves that a mere change of the leaders in power does not guarantee change until the unjust social order is finally overhauled to make way for the economic, political, and cultural empowerment of the greater majority of the people.

Until then, imperialism which holds the country captive by foreign powers, feudalism or the monopolization of large tracts of land by a few oligarchs, and bureaucrat capitalism or their use of the state bureaucracy as a business venture, will continue to prevent genuine national development.

Ultimately, Aquino’s anti-people programs will only push millions of Filipinos to pursue militant collective struggles for the assertion of their democratic rights and interests.

In the coming months, the youth will play a larger role in exposing the Aquino administration’s empty promises and reformist posturing and the bankruptcy of the entire ruling system. More than the little acts of kindness that Aquino exhorts in his SONA, they will take part in large-scale collective actions that truly empower the people and effect real social transformation. ■

Last July 27, I joined TV host Jun Lujero and Iloilo City Councilor Atty. Joshua Alim in their weekly program Central Point to react on President Noynoy Aquino’s second State of the Nation Address (SONA). These are some points that I brought up as well as the ones that was not able to mention during the one hour show.

SONA 2013 or the Idiocy of Noynoy’s Neoliberal Dogma

The State of the Nation Will Not Be Televised

The Real State of the Nation